Sunshine at last! Such a welcome change from the icy winds and leaden skies of the beginning of February. As a family, we’ve moved on a little from deep hibernation to trying to embrace winter outdoors – mostly involving half hour dashes into the cold, downing hot chocolate from a flask and hurrying back inside again.

This weekend, however, we are down in Hampshire visiting my parents and it was just beautiful for our walk to the river this morning. 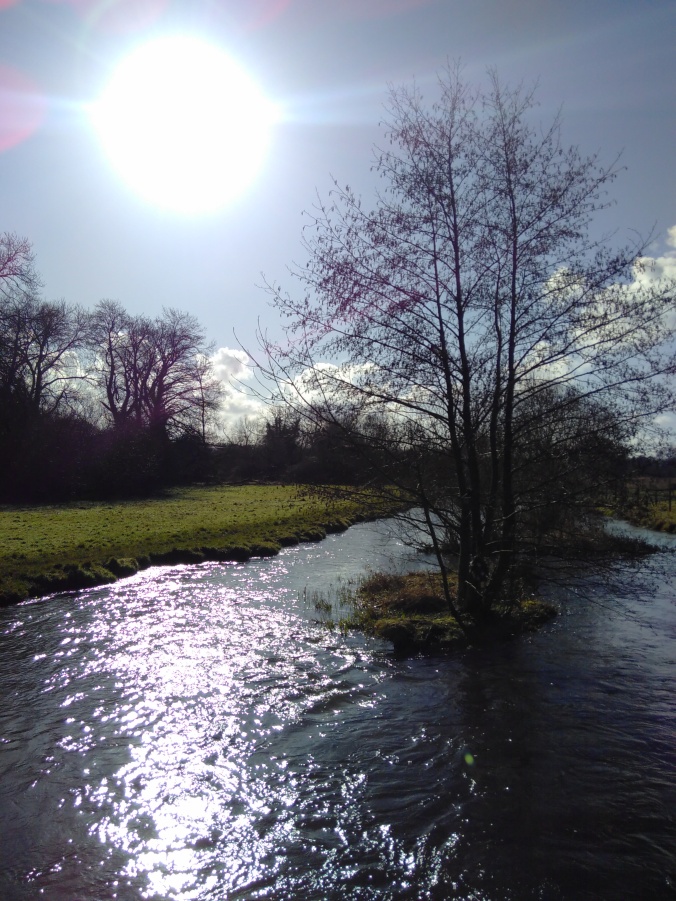 Tonight my parents are babysitting so we can try a new (to us) pub in the next village for a belated Valentine’s date. I’m looking forward to it – the pub has a good reputation and meals out sans kids are a rare treat.

Talking of treats, of course the day before Valentine’s was Pancake Day and we found the best pancake recipe: red velvet pancakes. Not only were these very delicious (partly because they contain chocolate) but proved to be a great way of (*whispers*) getting beetroot into the kids. My husband read recently that most superfood claims are empty but the one that really does deliver significant health benefits is beetroot. Apparently. Anyway, we ate them with lemon, sugar, and freeze dried strawberries – yum.

So those were the pancakes, what of the pangolins? Well, I’m delighted to host my very first guest blog post, from my husband who will explain…

What’s your favourite animal? It’s a common enough question to ask and gets all sorts of replies from the everyday to the exotic. Mine is a pangolin. They are amazing creatures. A bit like a cross between an armadillo and an anteater, covered in head to toe with overlapping scales made of keratin (the same stuff as your nails); a complete suit of armour that would give an armadillo a bit of an inferiority complex.

What got me thinking about them, somewhat randomly, was a conversation with all the family about exciting plans for this year, an antidote to the cold, dreary weather outside. We had lots of great ideas: go to the beach, have more adventures, play with dinosaurs…(I think our youngest has already got this covered but I admire his focus). I decided I would try and see a pangolin for the first time and not having the wherewithal to get out to Africa or Asia and see them in the wild I had googled “pangolins zoos UK”. I didn’t get a single hit. It turns out that pangolins are terribly hard to keep alive in captivity, but I did find out that you can adopt one for a few quid a month and after dropping a heavy hint to Mel, I was delighted to find out that she had done just that for me as a Valentine’s gift. I was stoked and so was our oldest, who declared that they were his favourite animal too. However he looked slightly concerned. “Daddy”, he said, “We’ll have to make sure Sandy doesn’t hurt it” (Sandy is next door’s cat, who visits often to take advantage of our sunlit conservatory sofa). He had not unreasonably assumed we were actually going to adopt one. I briefly pictured a DPD courier arriving with a small curled up creature in his arms “package for Mr Coath? Don’t worry it will unwrap itself eventually…”

I explained what adoption meant in this context. He then wanted to see a video of a pangolin, running. This proved impossible to find. The best they seem to be able to manage is a gentle amble. Given that they are armour plated and can roll themselves into a perfect ball that not even a lion can open this has suited them fine for millions of years. Until they met us. Humans just pick up the ball, boil it, eat the pangolin and remove the scales for use in Chinese medicine. They are so sought after, that they are the most trafficked animal in the world.

Our oldest discovered some of this at the end of the video that he had been watching of the pangolin not running. He was outraged that anyone would do this and wanted to come up with a plan to stop the bad people. I love him for that. He still lives in a world where not too many bad things happen and, if they do, he has the faith that they will all be sorted out. It pains me to think that as he grows up he will discover that this isn’t always true. But there is another way of looking at it and that is to take a leaf or two out the 5-year old rulebook, develop some can-do attitude and get out there and makes things better, one pangolin at a time.

Until this week we’d knew little of pangolins but we found out that today is World Pangolin Day – who knew! So if you fancy finding out a bit more about these beautiful creatures check and seeing a baby pangolin stick out its tongue check this out. In the meantime, happy Pangolin Day everyone!

One thought on “Of pancakes and pangolins”