Hot hot hot! Who’d have thought our prolonged and snowy winter would be followed by such a roasting June and July?!

Yesterday it was Sports Day at school and all sorts of measures were in place to keep the kids cool – from well-placed gazebos to pre-run spritzes by the teachers. Not so for the parents – we were lined up in full sun for an hour of cheering duties. Half an hour in, my 3 year old declared it too hot and he wanted to go home. Concerned, I splashed water over him, deliberately wetting his t-shirt to cool him down which prompted him to start wailing loudly. We were saved by the announcement of the toddler’s race in which he participated enthusiastically and fully believed he won (he didn’t). His brother was similarly thrilled to have won both of his races. He didn’t either! He came came mid-way in one and although he came first in the other, I’m not sure the holding of the beanbag on his head in the obstacle race would pass a stewards inquiry! Anyway, everyone ended up happy so perhaps we will leave learning to lose (and win) with good grace for another day.

I’ve been finding getting outside with the boys to be just as challenging when it’s hot as when it’s cold. A playdate in the cool of the stream in the local woods last week with some friends was going swimmingly with six happy exploring children and a woodland snack picnic. Then two of them accidentally walked into a wasps nest – one little girl picked up 5 stings and we had to do an emergency evacuation! OK, not an actual emergency but you never know how people will react to stings and she was in a lot of pain so we swiftly headed for home. 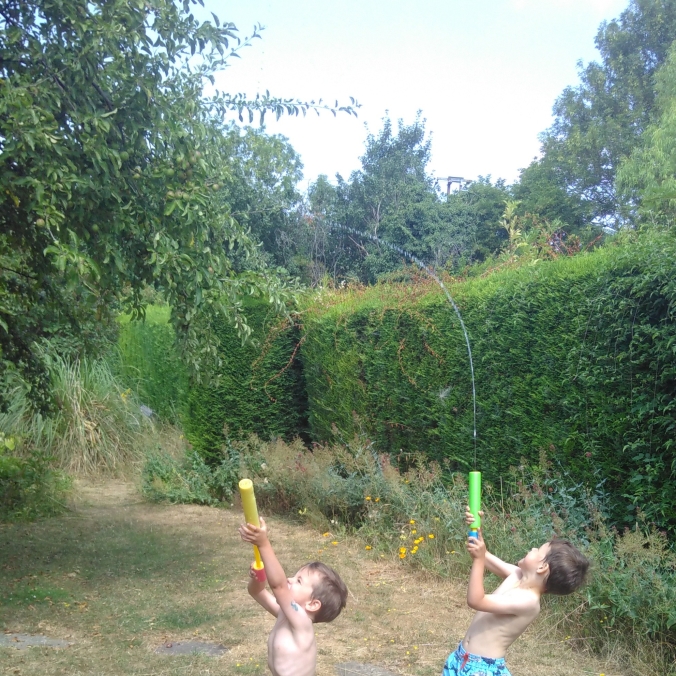 This week we’ve been less adventurous and stuck to water fights in the garden although I did get the boys and a school friend to do the Big Butterfly Count which only took 15 minutes and they got really into it. Highlights were a massive dragonfly (OK it didn’t count but the boys loved it) and a gorgeous orange comma which kept landing on the notebook that I was recording our sightings in, much to their delight. I took some great unposed photos of the kids pointing at each new spot but my little one’s response to the heat is to spend as much time naked as possible so they’re not for the internet! Here is one of the many gatekeeper butterflies we saw instead.

I helped the boys submit their sightings online and and a rather nice certificate was emailed straight back to us!

I’ve concluded that water-based activities are definitely the way to go. On Saturday, we had a very chilled afternoon at the Letchworth splash park with our friends while on Sunday we revisited the lovely abandoned watercress beds next to the meadow down the road.

Very avid followers of this blog may remember that one extremely cold January day, we forced ourselves to leave the house on an expedition to the very same place where we uncovered crayfish and a little frog before beating a retreat to the local pub for chips and hot chocolate. However at the time we promised ourselves we would come back at the height of summer and finally when it was too hot to do anything other than flop around our lounge I suggested we headed back there to explore. 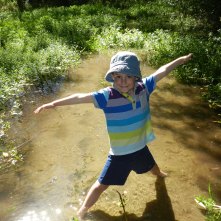 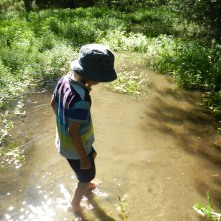 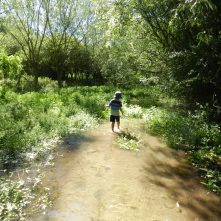 Our big boy loved the opportunity to sink his feet into the soft silt of the stream bed and create giant footsteps. Meanwhile, the little one who had been happy to get welly-fulls of water on the January trip (and it really was properly cold then), refused to paddle in the summer heat. The springs that feed the watercress beds come directly from the ground so it is always colder than elsewhere but still! Anyway, we parked him on a woody bank where he happily played with sticks while we went exploring the streams.

In places you could actually see the spring water welling up from the ground and there was much excitement on uncovering a bullhead fish from under a rock.

We watched him for a while before conceding that even we were finding the water very cold. We headed back across the meadows to home, stopping only to admire the amazing spiders nests in the long grass by the stream.

So water has been our friend these past weeks but I do wonder when the heatwave will finally break. Mind you, it’s the last day of term today so the arrival of the holidays will surely do it!