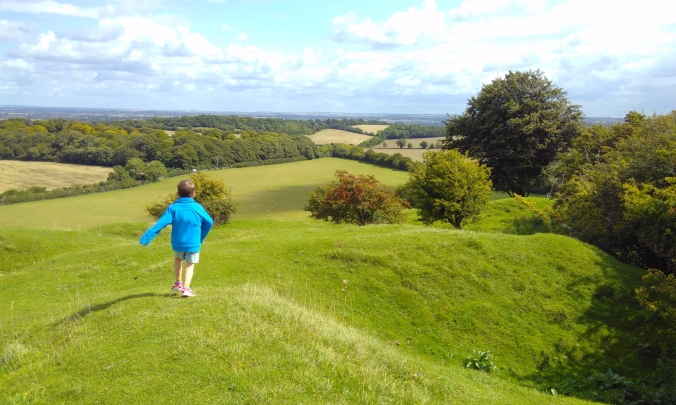 How did we get here already? The remainder of the holidays has just flown past. I can’t believe we’re back to school again on Tuesday. I am somewhat in denial – at the time of writing, new school shirts remain untried on and I know for a fact that the trousers I have in the drawer are currently way too long. But hey, I have three whole days yet to go. In the meantime, here are some of the other things that have filled our summertime since our Pembrokeshire holiday… 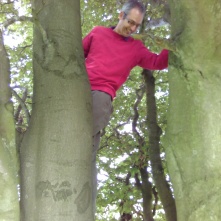 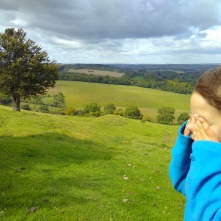 August… Not the summer weather we’d hoped for hey? The best we can describe it is so-so. One so-so Saturday, we engaged in hide and seek and,ahem, hill rolling on nearby Deacon Hill. I haven’t rolled down a hill for, ooh, at least a quarter of a century. It was steep and persuading myself to complete the first full body rotation was tough but after that I was pretty into it, in fact it’s fair to say my husband, Dom, and I were way more into it than the boys. Here is photographic evidence that we were actually this ridiculous – my gift to you and the internet! 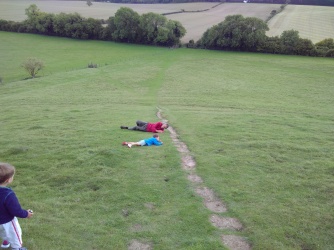 That day I was a magical spider monkey. Most days in August we’ve been a new creature. I’ve been a magical woodpecker, dragon, superhero-lizard, ring-tailed lemur and Gastornis (ancient bird featured in a dinosaur magazine) among many (many) others. Today I am a magical glass dolphin. Occasionally I get to choose, but mostly my entity for the day is assigned.

On the day that Lara came to visit we were magical hummingbirds. We were looking after her as part of a childcare swap with some friends. On the Friday my boy had been entertained royally with a visit to Stockwell Park with its great museum displays and play areas. My plans for the return day were a little lower key. We weren’t able to use the car for boring carseat reasons and she is not a scooter fan so instead we started in the garden apple-bobbing and picking up windfalls. 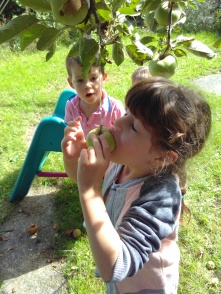 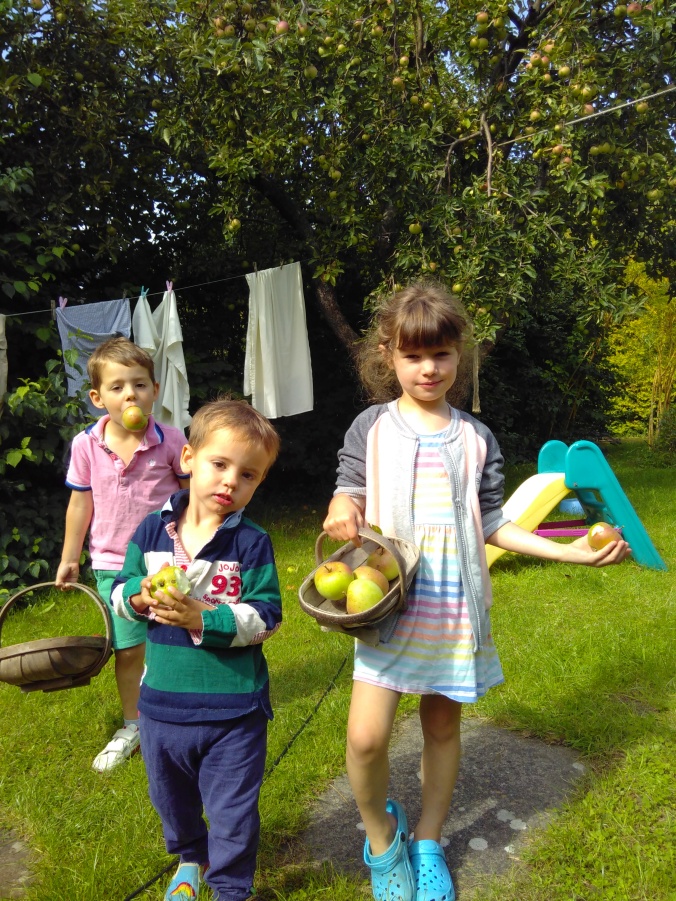 Lara instantly bought into the idea of being a hummingbird and the kids fluttered down to the community garden round the corner, stopping to sup nectar from flowers in front gardens along the way. 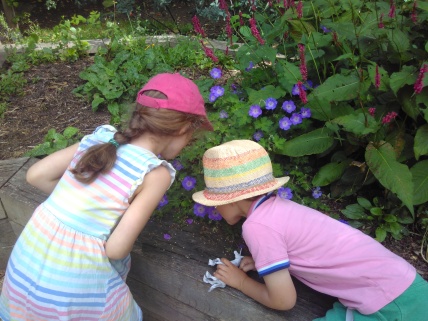 I’d planned that we would pick elderberries (for wine!) from the forest garden but hardly any were ripe so that only lasted about one minute before the kids went and played on the swings and slides in the park.

After lunch I decided to up my game – we would make paper boats – and sail them down the river. The kids were enthusiastic: we followed a video on YouTube for the origami bit and had fun decorating them before launch. 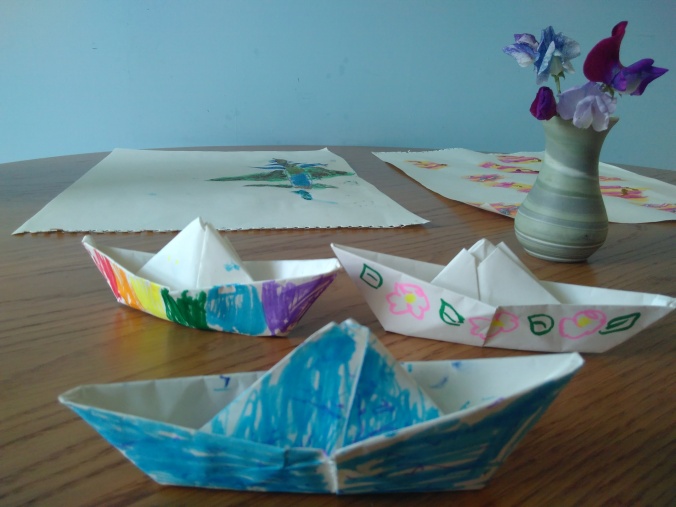 I’d anticipated we’d be able to get into the river and float them down to each other quite a few times before they got too soggy. I’d done this last summer on a different local stream. After ice creams on the riverbank we headed to the launch spot but I hadn’t anticipated huge amounts of water weed and silty mud fringing every possible river entrance. 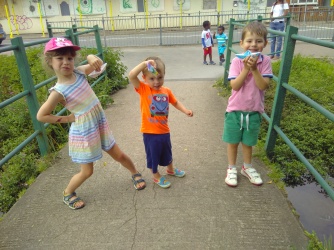 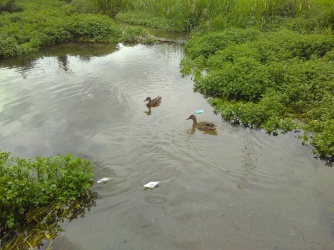 In no time at all they were all stuck in the waterweed a few metres downstream and regrettably well in sight of the bridge. My younger boy burst into tears immediately and demanded I free his boat. We tried in vain for about 5 minutes to enter the water to release the three little stuck boats from their leafy ports. Then my older boy’s boat abruptly sank. I guess it just got too soggy but at this point he also burst into tears.

I tried to persuade them in my cheerful voice that we’d carried out the plan, we’d launched the boats and that was great and now we should just leave the bridge and go and play in the nearby sandpit. This cut no ice at all. I got cross and they cried louder and, well, it wasn’t my finest parenting hour! Lara was very stoic about the whole thing though, bless her, and eventually the draw of the park was enough to distract us all. We had to cross back over the darned bridge with its emotional boat-drama cloud still hanging over it to get home but the promise of Paw Patrol before dinner solves all.

And that last blog about wanting to experience summer rain? Well, the very day after I posted that was wall to wall drear and I had absolutely no desire to go outside. Summer rain or not, I had no energy, no wish to leave the sofa and certainly no desire to get wet. I think we did some kind of painting effort and the telly definitely featured heavily and I had to smile. Maybe next week!

Anyway, enough tapping at the keyboard, these holidays are done! It is now the day before school starts and while enough of the uniform mercifully fits, in no way is it all laid out and ready for school so I’m going to post this at summer’s close and ready us for the start of the autumn term. Deep breath…

What is your favourite place? I think mine must be the little chalk stream in Hampshire that runs through the village where I grew up. It is my river 🙂 It’s one of my favourite places in the world and a couple of weeks ago I shared it with my boys. 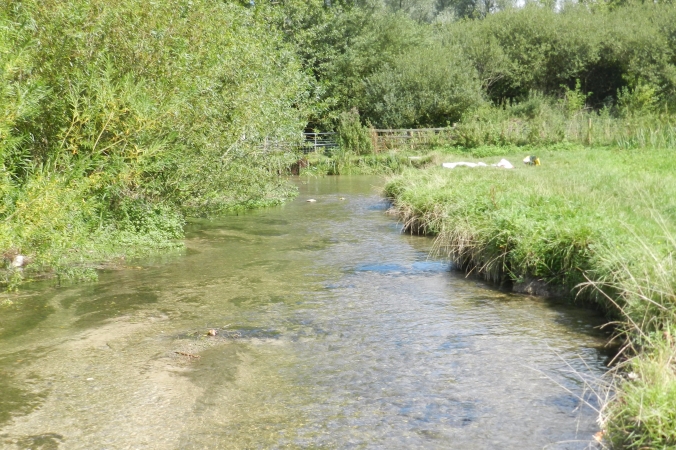 It’s a funny name, looking at it objectively – Me-on, named after the ancient Briton tribe the Meonware apparently. It was where I spent many a summer afternoon after school with my best friend from my village. As soon as we got home from a long hot bus journey, we would rush inside, grab our swimming things and head for a swim in the deep mill pond at the bottom of the mill race. It‘s the only part of the river deep enough to swim and it’s actually on private land but the owner used to put up a notice saying “In this hot weather, any local children can swim in the river”. These days it just says “Private: please keep to the footpath”. I feel a bit sad that the village kids these days can’t do that any more.

After our first cool down, my friend and I used to head downstream to a secret bit of river between two bridges, only accessible from either end and out of sight almost straight away. I remember sunshine, yellow flags and the occasional kingfisher. It was too shallow to swim so we invented “river gliding”, making your body as flat as possible and pushing yourself downstream, which we’d do until we reached the public bridge south of the church.

It is to this stretch by the bridge that I took my boys – it was too cold even for river gliding but we had fun in a rubber dinghy and pretending to be explorers as we set foot on the new island that has established around what was once just a fallen log in the middle of the channel. I’d anticipated heading there every day for picnics by the river during our five days in Hampshire but this was the second week in August, if you remember it, and it rained a lot. But as you can see from these photos one morning we had just enough sunshine.

We had a little moonshine too… Somewhat tipsy after (the same as it happens) school friend’s fantastic wedding in the village, I dragged Dom down to the river just before midnight. The moon was so bright and it looked beautiful down there, I even managed a shaky photo.

The river links my present to my past. Combined with the warm haze of a few drinks and the moonlight, it was a special moment to share at the end of the wedding day of the friend who’d paddled there with me years ago. It is my river and it always will be.